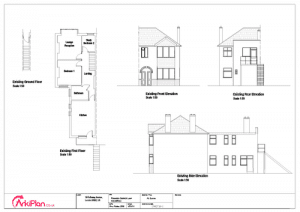 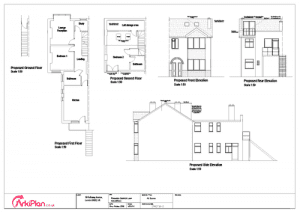 Loft conversion plans always need Building Regulations Approval, by either your Local Authority or an Approved Inspector. You can do this one of two ways;

1) A Building Notice
This is just a form that states you are converting your loft and it enables the inspectors to quote your fees and tells them to expect to carry out some site visits soon. Obviously, there are no loft conversion building regulations drawings produced with this option and you, or your builder, can submit the Building Notice.

2) Full Plans Application
This is the one we would recommend as Loft Building Regulations Drawings are produced online by us and are pre-checked by the Building Control Officer before building work starts. This means you can be entirely confident that you will not building anything non-compliant and have to make costly corrections. The fast loft drawings we produce will include all the relevant detailed section drawings, a loft conversion specification and all relevant notes to get you Full Plans Building Regulations Approval. Subsequently, your builder will also have a nice detailed loft plan to work from, further reducing the risk of mistakes on site.

What are party walls?

Party walls are those walls which neighbouring properties share: your home on your side, your neighbour’s on the other. So, if you’re semi-detached or are creating space with a terraced house loft conversion, then party walls will certainly be involved.

Structural work which affects these party walls requires specific permissions from the owners of your neighbouring properties and if the adjoining property is divided into flats, then party wall agreement may need to be reached with all owners affected.

A party wall agreement is needed if you intend to carry out any of the works listed below:

Basically, if your loft conversion requires a party wall to be cut into, or the fabric of it changed in any way, then the Party Wall Act 1996 will apply. This act relates to home improvements such as extensions and loft conversions which commonly affect party walls and provides a framework for preventing and resolving disputes in relation to party walls.

Neighbouring homeowners should be notified of the work through Party Structure Notices, as specified under Section 3 of the Party Wall Act and should:

Of course, none of this is a substitute for also talking to your neighbours about the intended works. However, Party Structure Notices are a statutory requirement and formal process, so will definitely need to be served, even if you’ve had that chat.

The process does of course also protect your own interests, in the event that any problems with the neighbour’s property are identified prior to (or during) the works.

While the Act contains no enforcement procedures for failure to serve a notice if you start work without having first given notice in the proper way, adjoining owners may seek to stop your work through a court injunction.

Although the notice periods set down in the Party Wall Act are stringent and require you to allow neighbouring owners 14 days to respond once they’ve received their notices, if your neighbours’ consent in writing, then work can begin from that date.

If the legal owner(s) of any affected property fail to respond to your notice then after the 14 days it is assumed that they have dissented – not agreed to the works. In this case, the loft conversion planning process will then involve an additional surveyor being appointed to safeguard the neighbours’ interests.

How a party wall can affect a loft conversion

Most loft conversions within a semi-detached or terraced house will require party wall agreements because the work almost always involves the insertion of supporting beams into a party wall.

Another area affected by the party wall act is that of work on the boundary line, so if your surveyors need to check your foundations by digging down within a stipulated distance of the neighbouring property, then a party wall notice may also be required. Where your loft conversion offers you plenty of scope for choice, it’s worth speaking to your loft conversion specialist as options such as a chocolate-box type dormer, set centrally into the roof space, may present an alternative which does not require party wall agreements.

Where party wall agreements are involved, you will almost certainly need to budget for this. Even if neighbouring owners readily agree to everything, there will be the additional costs of the Party Structure Notices – around £100 per notice.

If the neighbours dissent, or request the protection of a surveyor, then you will be responsible for paying, so these costs should be factored in when budgeting for your loft conversion.

Where the work significantly affects party walls, the Party Wall Act also allows for compensation payments to be made to affected neighbours. In all cases, the amount will vary depending on the actual construction but will be decided by the surveyors involved.

Getting the party started

If the neighbours agree from the outset in writing, or once a surveyor has satisfied and safeguarded the interests of neighbouring owners, then the legal go-ahead in the form of a Party Wall Award is offered. This award includes details which have been agreed by any and all of the surveyors involved, outlines the schedule of works, and covers all aspects which safeguard the neighbours, such as access rights and remedial works.

To achieve success, serving notice correctly is crucial. If this has been correctly done then there is an accepted process which the surveyors and your loft conversion specialists will follow. In the event of problems, such as unexpected damage to your neighbour’s property, then this will be dealt with by the surveyors. If notices were not served correctly initially, then instead of the surveyors sorting it you could be taken to court, where costs of far more than £100 a notice are likely to be found against you!

All parties on board

Party wall issues sound complicated, but don’t have to be. If notices are correctly served and neighbouring owners have put in writing that they are happy for work to proceed, then work can start promptly.

There are also several ways to help smooth things along and keep all concerned parties happy:

All the Gov information here